After last year Agriplant already expanded the Agriplanter range with the 6SP-A, a fully automatic six-row planting machine, it is now introducing the 5SP-A, a five-row planting at a row distance of 60 cm. At the same time, Agriplant is further refining the precision on these two machines. 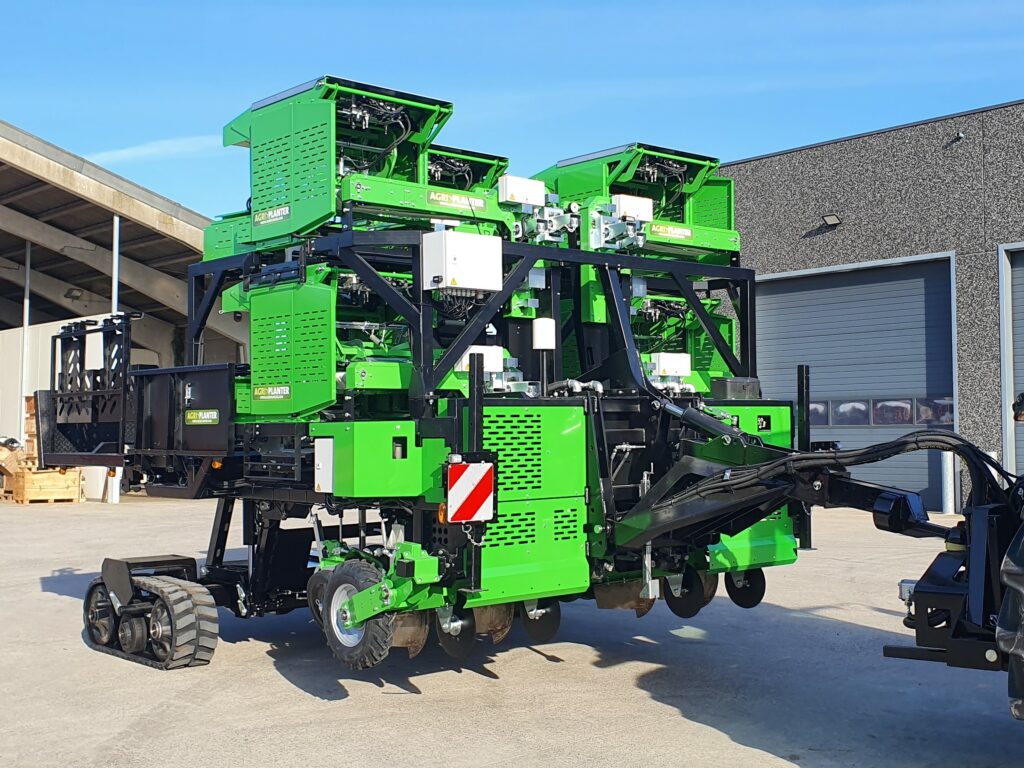 Agriplant builds the 5SP-A in the same modular way as its other planters. In addition to the robots, selectors and plant units, the 5SP-A also has almost the same chassis as the 6SP-A. There are 2 robots on top of each other on both sides of the planter. They operate the 4 aligned outer plant elements. The fifth middle robot, like the plant element, is placed slightly more to the rear.

The machine has its own hydraulic system consisting of a 200 liter oil tank, a cooler and four pumps. Three of them are 19cc pumps. 2 of the 3 work under low pressure (35 bar) and drive the robots, the 3rd works at high pressure (180 bar overpressure) and drives the alternator. A fourth 25cc pump is also connected to the high-pressure circuit and provides all other hydraulics on the machine, such as the control of the pressure wheels, the hydraulic cylinders for raising and lowering the chassis and the control of the back axle on tracks that can steer up to 12°.

Agriplant is using hydro motors for the drive of its plant units for the first time. Also on the 6SP-A, the mechanical drive has now been replaced by a hydraulic drive per row. These variable motors are directly connected to the tractor hydraulics and require only 30 liters of oil per minute. Their rotational speed is standard up to 10% faster than the actual driving speed. Agriplant deliberately chooses to measure the driving speed using a running wheel on the side of the machine and not via the GPS. This makes the machine more precise.

The hydraulic drive gives the machine more plant flexibility. Section control and variable planting are now available. Operation is done from the tractor cab via the new “Agriplanter Smart Control” 7” touchscreen, which can be used to control the engines and thus the rows individually. The speed per row can also be increased or decreased in percentage. For example, when planting, harvest tracks can be created by laying down rows, and the planting distance of the adjacent rows can be slightly reduced at the same time, by increasing the rotational speed of those planting units a number of percent.The “Agriplanter smart control” touchscreen also offers the option of manual machine operation or operation via the tractor GPS. The tracks can also be controlled manually or via GPS. 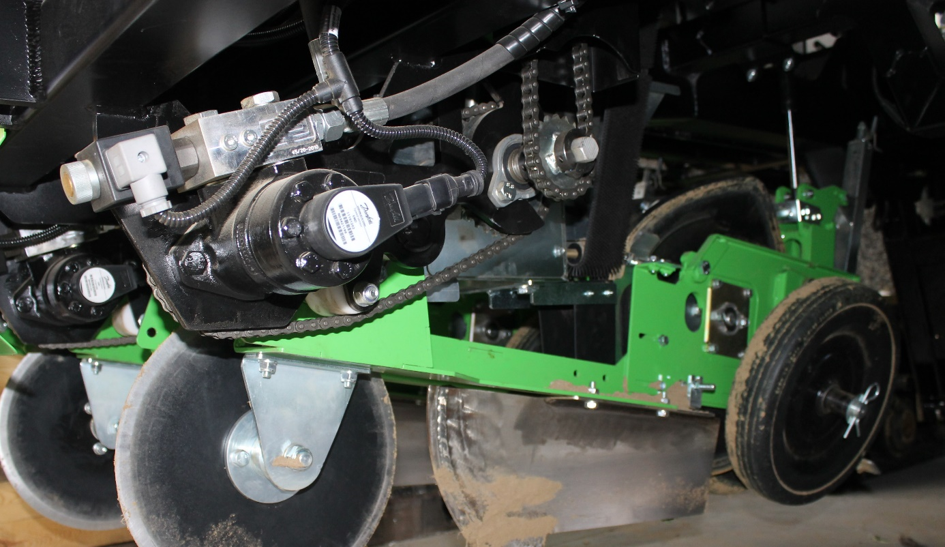 The mechanical drive on the 6SP-A has been completely replaced by a hydraulic drive per row. The new 5SP-A is also equipped with it.

The Agriplanter can be operated completely via the touchscreen. Only the lifting and lowering of the machine is done via the two sticks on the rear control box. Manual control of the tracks is possible via the bottom stick. 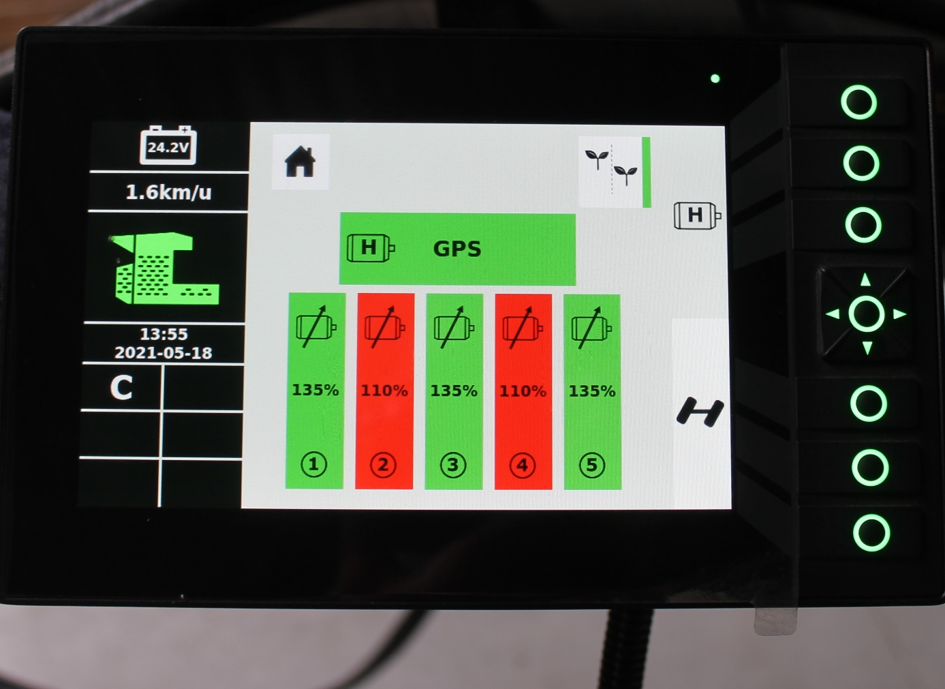 The touchscreen shows that operation is done via GPS. Two rows are closed, the 3 adjacent plant elements rotate 35% faster than the driving speed. 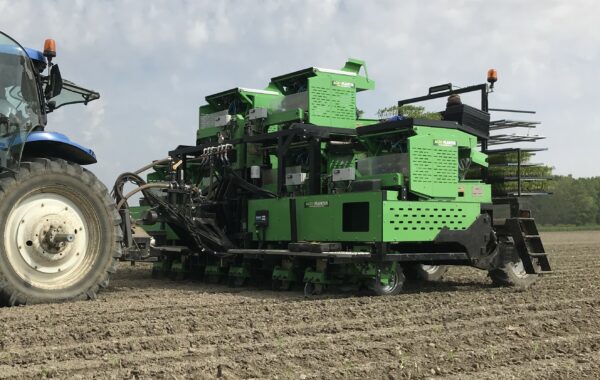 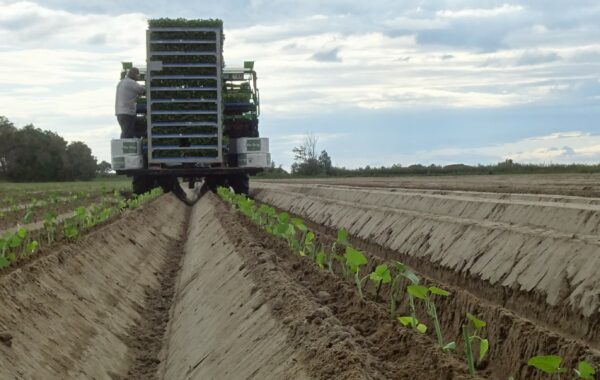 25 September 2020
The development of fully-automated transplanters for plants with a root ball is continually evolving. Belgian company Agriplant’s transplanter machines are …
Read more